Home True Tales of a Valley Birder Back to Story List

No doubt many Valley residents already have heard of the top Valley birding hot spots, twenty to thirty of them. At the head of the list is Santa Ana National Wildlife Refuge, with 2,088 acres, just south of Alamo, along several miles of the winding Rio Grande encircling two sides of the refuge. It was the first National Wildlife Refuge in the Valley, having been purchased in 1943.

Santa Ana N.W.R. offers 12 miles of hiking trails, three Resaca (oxbow lake) clusters, a great visitors center, picnic tables, bird feeders and ponds. It has a photo blind, a forty foot fire tower (with 73 steps to reach the top), and a suspended rope walk twenty feet off the ground. Its habitat is comprised of thorn brush, mowed meadows, wetlands, and riparian (river) forest with its hanging clusters of Spanish moss that looks like an old man's grey beard. We have experienced many years of drought during the last two decades. During this time at Santa Ana the dryland thornbrush does well while the rich riparian forest recedes. Then during years of good rainfall the riparian forest expands again. Since the Rio Grande now rarely floods, the Resacas at Santa Ana N.W.R. are filled each fall by management to simulate the fall floods that filled them in centuries past. Then during summer they dry out again, and some of the special animals that live in them, like crawfish and frogs, burrow into the muddy earth as they dry out and hibernate until there is again standing water in the Resacas. These Resacas also help sustain the valuable Riparian forest.

Wintering birds love Santa Ana N.W.R. They fill the Resacas with their calls, paddling across the water and stalking through the shallows. Ducks and shorebirds are common here during our cool season. The trees attract song birds, residents and migrants, and butterflies flit through the dappled light and shade. Raptors sail overhead or roost atop vantage points. Volunteers lead nature walks and stake out spots at Willow Lake to help visitors locate, identify, and enjoy the birds and butterflies. Bob cats, armadillos, and javelina are common, even cougar are spotted on rare occassions.

Spring and Summer are also rich birding times here. If one adds the number of bird species to the number of butterfly species, and compares this figure to all the other 550 national wildlife refuges in the United States, it turns out that Santa Ana has the highest species count of any of them, making Santa Ana the Jewel in the Crown of the National Wildlife Refuge System.

The best part is we here in the Valley can visit Santa Ana N.W.R. any day of the week between dawn and dusk, and it is close by. We are so fortunate compared to the thousands of visitors who fly in from across the U.S. and Canada, and from overseas countries, to experience this amazing refuge. Plan to spend some time in the very interesting visitor center, ask to see a video about the refuge in the theatre, and take a tram tour around the refuge to hear about some of its natural history from interpreters. Our children should all become familiar with Santa Ana, because it and our other great refuges and parks here represent the rich natural heritage of our Valley. 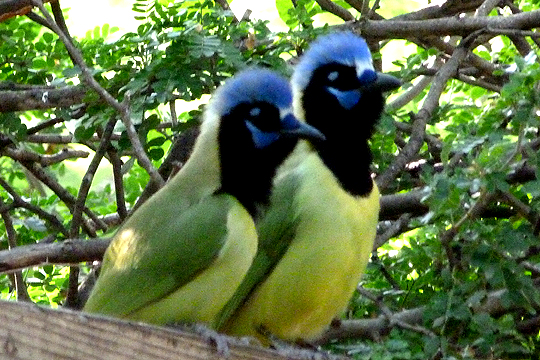