We Should Have Been Shot!
by Dennis Craswell
published March 2017

The Castaways recorded Liar, Liar as a five piece band, but by the time they traveled to the West Coast to promote their hit, bassist Dick Roby was out of the band, leaving (from left) Roy Hensley, Jim Donna, Denny Craswell (me) and Bob Folschow.
In the early 1960s I was a teenager in Minnesota doing all the things teenagers did back then. One was playing baseball and another was playing music. One day, on the baseball diamond I asked another guy, do you play guitar? He said yes so we began to get together and jam. This was the beginning of The Castaways. Now you may or may not remember The Castaways as a musical group, but you would probably recognize our one and only hit song ... Liar Liar. Yes, we were one of the many legendary one-hit-wonders of that era.

Recorded in 1965, Liar Liar went to number one on virtually every radio station in the U.S. and many foreign countries selling millions of copies. Due to this success, we started touring to promote the record. Of course we were not big enough to be headliners, but we did open for popular groups of the time such as The Everly Brothers. This was a big change for a bunch of naive guys who thought it was a big deal playing frat parties for sixty bucks a night! So there we were. We had gotten a call to open for The Everly Brothers at the Prom Center Ballroom in St. Paul, Minnesota. We knew we would play our hit, Liar Liar and a few other unknown originals, but what would we do to fill out the set?

We all got together to discuss it and decided that we should play our very best stuff. Well, we took the stage and performed our originals and then covered the songs we liked and knew best like Bird Dog, Temptation, Problems Problems and Cathy's Clown. We played them perfectly! We were so proud of ourselves that we did not think about what we had just done.

Then as if a lightning bolt struck, we all realized that we had just played the hits of the band we were opening for! My God, they were our idols, we worshiped them and we had stabbed them in the back by playing the same songs that they were going to play as soon as the stepped on stage.

We were sure that we had blown it. We would never be hired to open for any band ever again. It was no one's particular fault, we had all agreed by vote to play the songs we played. We were sure our musical career was destroyed. As soon as we stepped off of the stage Don or Phil Everly, I can't really remember which one it was, headed our way. We thought, Oh Boy! Here it comes!

But you know what they said ...
"Boys, that is the best that anyone has ever played our stuff." 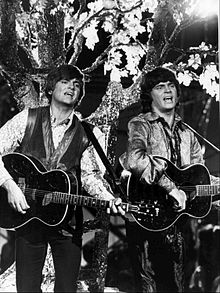